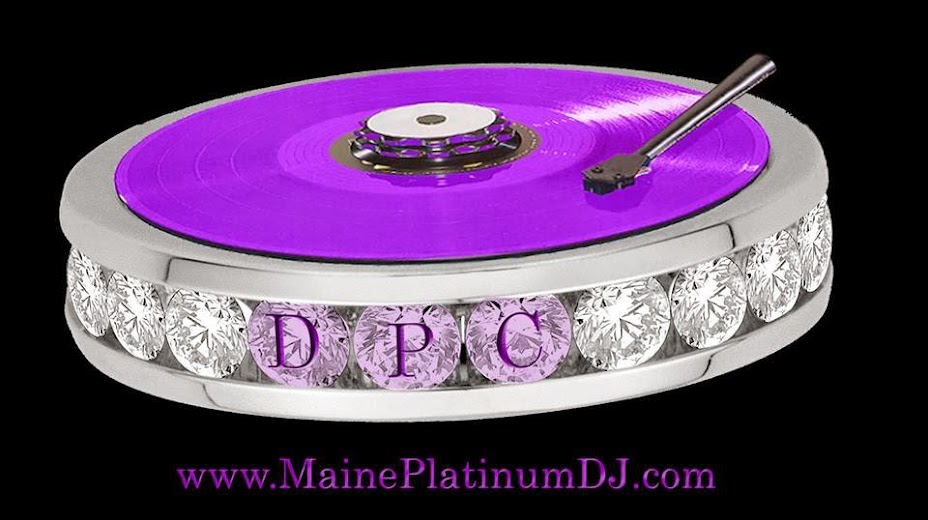 Well , we wrapped up the month of June in Jackson, NH. Jackson is a lovely, picturesque village next to Story Land. There are literally dozens of places to get married. This was my third trip back to Jackson, and each time has been an exciting new venue.

This time, we were at the Wentworth Inn . It is a lovely historic facility with many buildings sprawled across their grounds . We were in a permanent tent that was decorated beautifully.

The Grand Entrance for the Bridal Party of 23 was , " Sirius " from the Alan Parsons Project.
Made even more famous by the Chicago Bulls as their entrance song. The Bride & Groom entered to " Fire Burning " by Sean Kingston , and that definately set the tone for a rockin' wedding.

They immediately went into their first dance " This Kind of Love " by Sister Hazel .
" Ashokan Farewell " from the Civil War soundtrack was the F/D dance , and " Tupelo Honey " played for the M/S dance. The Cake song was " Everything " by Michael Buble.

Anniversary dances followed after some group photos and then the dancing began .
This crowd was very energetic and loved to dance ! They knew all the words to all the 80's songs and needed little if no prompting from me to scream it out .

" Last Dance " played out for their final dance and everyone headed out to the afterparty.

Other weddings took place this month as well and more are coming !
Special mention to  DJ Nate &  Tom  for their weddings this month at the Colony in Kennebunk Port, Shawnee Peak in Bridgton, and the American Legion in Springvale .

They are but some of the talented DJs who we represent. Many more functions are to come !
We look forward to meeting all of you out there !

Thank you !
Posted by Maine Wedding DJ Patrick Daniels at 10:26 AM No comments:

Yes, avery, very busy weekend for DJ Pat ! Three in a row and we kept the pace and the energy there for all !

Allyn & Peter were wed at Clay Hill Farm in Ogunquit . We have been there several times and highly recommend this venue ! Jennifer and Rachel do a fabulous job there !

Introductions were to " You Make my dreams come true " by Hall & Oates.
" Lucky " by Jason Mraz was the cake song and " Fields of Gold " bt Eva Cassiday was the first dance.
" Father/ Daughter " by Paul Simon was the Father/ Daughter dance , and " My Baby Blue " by Dave Matthews was the Mother/ Son song.

After a wonderful mix of classic rock, pop, alternative and a rousing blend of Merringue music , the festivities concluded with the Last Dance " At Last " by Etta James.

Nancy & Dennis were wed at The McKernan Center at S.M.C.C. on a gorgeous afternoon.
The ceremony took place on the grounds with the reception following immediately afterwards in the intimate hall.

The Grand Entrance was " Say Hey I Love You ." Their first dance followed ," Ain't no Mountain High Enough " by Michael McDonald ( very nice )
The Mother / Son song for Dennis 7 his Mother, Barbara was " Chances are " by Johnny Mathis .
" My Little Girl " by Tim McGraw was the perfect song for Dennis to dance with his daughter, Abby. This was followed by " Somewhere over the Rainbow/ What a Wonderful world " where Nancy danced with both her sons, Jesse & Max.

Nancy's son, Jesse had his band there ( Station 85 ) and they played a rockin' first set of 70s classics. DJ Pat took over from there and kept the floor packed right up until the very Last Song " Save the Last Dance for me " by Michael Buble.

June was definately the month for people booking us early ! Scott and Jessica hired us back in April of 09' right when they met us ! They knew they wanted me as we had a shared passion for all things Heavy Metal . The challenge was to tastefully incorporate their wishes throughout the evening without dilluting their vison .

The beautiful day took place at the Holiday Inn West where DJ Patrick Daniels is a preferred vendor there and has been for 5 years ( Thank you Holiday Inn !)

The Grand entrance was " This is how we do it " and then the lights dimmed for the Bride & and Groom and " The Game " by Motorhead erupted and the lights came on as they made their very cool entrance. " Killing Loneliness " by H.I.M. was their first dance .

" One in a Million " by Aaliyah was the cake song. A special F/D dance that started with " Africa " by Toto with Jessica dancing with her dad then turned into " Gasolina " by Daddy Yankee and Jessica's stepfather coming in to cut in . It was perfect !!
The M/S dance was " The Rose " by Bette Midler and then the party began !
The Last Dance was " Hotel Room Service ."

Congratulations Jessica & Scott on your rockin' celebration !
Posted by Maine Wedding DJ Patrick Daniels at 10:02 AM No comments:

Another family dear to my heart who retained my services two years ago for their son ; Michael's wedding , promised they would get in touch for their own 35th Anniversary for 2010 and they made good on that promise !

Robert & Sue hired me well in advance and moved the date of their function to accommodate MY SCHEDULE !! WOW ! Whenever that happens, I am very honored to know that I mean that much to someone and they truly value my services to book their date around my availability !
It was a lovely fun, intimate affair as they renewed their wedding vows in front of their friends and family.

They walked down the aisle to " Love me Tender " and " Happy Together " was played as their Recessional. " Colour My World " ( their original Wedding Song was played again as their 1st Dance , and " Can't Help Falling in Love " was the Last Dance .

Thank you so much for thinking of me again for your wedding renewal ! I hope to be a part of the family reunion being planned in the future .
Posted by Maine Wedding DJ Patrick Daniels at 9:53 AM No comments:

Amanda & Andrew were wed at The Agassiz Village in Poland. It was a beautiful day at this historic facility. The function room was a huge open wooden ballroom with balconies on both sides. Amanda's parents were cleints of mine 2 years ago and when Amanda got engaged, her mother Norma wasted no time in boooking me a 18 months in advance to ensure I was available !

Immediatedly following the Ceremony, Introductions began to a mixed medley of " Livin' on a Prayer," " Bad Boys Theme ," " I'm Too Sexy ," and for the Bride & Groom " Here in this Moment ." Their first dance immediately folowed with " When I Say I Do."

The decorations were a stunning blue and white theme complete with two ice sculptered swans on the appetizer table.
" Grow Old With You " was selected for the cake song and then the formal songs began ;
Amanda danced with her father Bruce to " Tough Little Boys " and then there was a special dance where the Groom, Andrew danced with his Mother- in law, Norma and the Bride ; Amanda danced with her Step -Father, Chris and her Father- in law; David to " My Wish ."
A rousing version of the " Time Warp " was played complete with family members donning their shades .

The Last Dance was " Lost in this Moment ."

Wedding season is in full swing ! We were off to the North Andover Country Club in Mass.
What a lovely facility ! Our first time there of hopefully many future weddings. Jim and Matt do an amazing job there and the staff is top notch and fun !

Matthew & Michelle were married last November, but decided to hold their reception in the summer so folks who were travelling could make it and enjoy the summer weather.

The Grand entrance was " Life in technicolor ii " followed by a beautiful slideshow and toasts from the Best Man, Michael Kashiwagi and Maid of Honor , Karen Carville.
" How sweet it is to be loved by you " provided the cake cutting background .

Their first dance was " Better Together " by Jack Johnson , with a Father/ Daughter dance of ," Daughter " by Loudin Wainwright. A Mother/ Son dance followed with " You make me feel so young " by Old Blue Eyes, Frank Sinatra.

" Another 1 bites the dust " from Queen was the Bouquet Toss song while " Foxey Lady " by Jimi Hendrix was a rocking Garter removal song. The Garter Toss was the " Ring of Fire " concept with a twist... It was the Social Distortion version.

The Garter On song was the Theme from " Mission Impossible " and our lucky lady who caught the bouquet made it almost impossible for the garter to be put on as she playfully kept shuffling her feet and switching her legs back and forth .

Much dancing ensued with great requests and the Last Dance was " Faithfully" by Journey.

Record Online Traffic for May 2010

May 2010 has come and gone and we received an incredible amount of traffic online directly and indirectly from some of our friendly competitors out there.
Many prospective clients are still shopping for their DJ by price first, which as we always try to educate people, " It's simply not the best way to hire someone who will be in charge of one of the most important days of your life."

You always get what you pay for and if you are looking for someone to " just show up and play music " and not actually repesent you and look after your best interests on your wedding day, you will get exactly that.

Many calls we received were for last minute 2010 dates June - September. We always advise people to book their entertainment 6-12 months in advance to ensure they get the DJ they want . Some folks told us their DJs double booked dates or they were not able to track them down as their date got closer. Those individuals are unprofessional, who call themselves DJs , that cater to real low prices. They overpromise and under deliver, or simply do not deliver at all.

We strongly encourage folks to do their research, read our links on the homepage on what to look for in a DJ and how to hire a Professional DJ. A few moments of your time is well invested when the outcome could have less than favorable or desired results because the " price was right , but the ability and lack of professionalism was all wrong ."

We encourage you to ask questions . As always our goal is to provide you with enough information where you feel comfortable to make an informed decision about your entertainment choice .
Posted by Maine Wedding DJ Patrick Daniels at 5:42 PM No comments: